An interesting finding in the federal government's Retirement Income Review report is that many Australians are dying with the majority of the wealth they had when they retired. 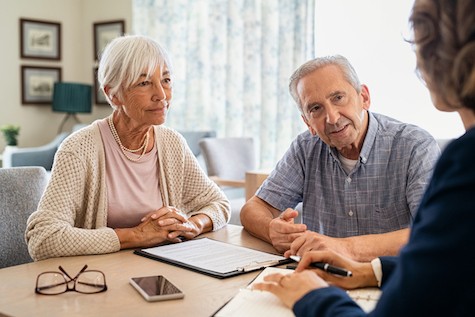 Having enough superannuation to enjoy a financially comfortable lifestyle in retirement is the aspiration of most Australians.

As the super system continues to mature, and with the benefit of compounding investment returns, average retirement savings balances are rising.

But an interesting finding in the federal government's just-released Retirement Income Review final report is that many Australians are dying with the majority of the wealth they had when they retired.

Concerned about outliving their superannuation savings, the report found that the majority of retirees tend to spend less rather than use financial products to better manage their longevity risk.

In other words, rather than wanting to spend up, many retirees are keen to watch their savings balance grow.

And that's pointing towards a huge blow-out in the payment of super death benefits, which actuarial firm Rice Warner projects in the Retirement Income Review report will rise from the current level of around $17 billion per annum to just under $130 billion by 2059. 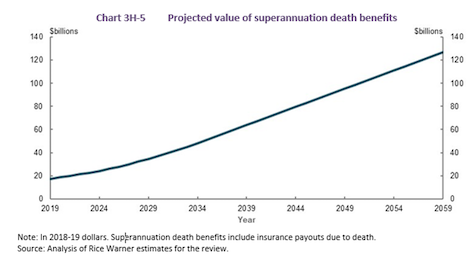 When there's superannuation still left over at the end of your life, it's most commonly inherited by your surviving spouse or children, or bequeathed to other nominated beneficiaries.

If you don't have a spouse, and intend to leave your super to your adult children, there may be serious tax consequences for them.

It all comes down to whether your beneficiaries are entitled to access your super funds tax free or not after you're deceased.

So, having an understanding of the tax rules around super death benefits is extremely useful. With proper estate planning before you die, it may be possible to reduce your after-death super tax liabilities.

While there is no formal inheritance tax in Australia, super death benefits are taxed in some cases.

Essentially, superannuation can only be passed on tax-free when it is left to a spouse or dependant children under the age of 18.

A death benefit dependant, as determined by the Tax Act, can also include de factos, former spouses, those with whom you have shared an interdependency relationship immediately prior to death, and others who were financially dependent on you just before you died.

Beneficiaries who fall outside of these parameters, such as adult children, are often caught up in the ATO's tax dragnet.

Superannuation benefits are generally comprised of both taxable and tax-free funds, based on the nature of contributions that have been made over time.

It's the taxable component – usually where the bulk of an individual's super funds reside – that will carry the tax liability for any adult children receiving your super payout on your death.

Transferring super wealth is a non-issue from a tax perspective if you have a spouse or dependant children to leave it to.

If you don't, there are ways to reduce your potential super tax burden for non-dependent beneficiaries.

One of them is through the use of what's known as a super recontribution strategy.

If you've reached an age where you can legally access your funds, this enables you to draw out the taxable component of your super as a lump sum and then recontribute it back into your super fund in the form of after-tax contributions.

Current laws allow individuals to contribute up to $100,000 per financial year as non-concessional (tax-paid) contributions, or up to $300,000 in one year using what's known as the three-year bring forward rule.

Keep in mind however that there are restrictions on personal super contributions for those aged 67 and above.

Using a recontribution strategy can effectively reduce or eliminate the taxable portion of your super, meaning non-dependant beneficiaries of your super may not have to pay any tax if it's received as a lump sum after your death.

When you're looking at who you want to leave your super to, it's very important you consider things carefully as some proper planning needs to be done.

Without planning there could be some unexpected and significant taxes bestowed upon your heirs, which could be exacerbated if any life insurance payout from your super fund is made to someone who is not a spouse or dependant.

To discuss your estate planning needs, including around your super death benefits and potential tax liabilities, it's important to consult a licensed financial adviser.

Do you have a question about something you've read in this article? Need more information? Want to book an appointment? Simply let us know below and we'll get back to you ASAP.